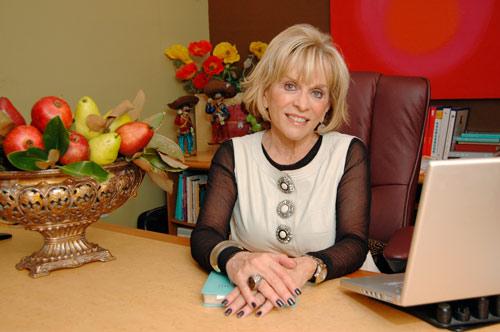 Louise Thomas is not only a nationally renowned event planner but has been extremely involved in the Tucson community for over 35 years.

She grew up in Beverly Hills, California and graduated from USC in Los Angeles.  After meeting the love of her life Al Thomas, she moved to Tucson to join her husband and his family.

She became actively involved in helping children and families after being faced with the loss of her 9 year old son, Michael. She served as founding member of the Ronald McDonald House and led the fundraising to retire their mortgage.  She founded in 1983, with the help of co-founder Jane Loew Sharples, Angel Charity for Children, Inc. and is still actively involved in the charity as Guardian Angel Emeritus.  She designed and produced the first ever Angel Charity Ball in 1983 and many, many subsequent themed Balls thereafter.

Louise is a Founding Emeritus Member for the Steele Children’s Research Center at University of Arizona.  Her heart has always been involved in serving and improving the lives of children in the Tucson community. The Louise Thomas Endowed Chair in Pediatric Cancer Research has been successfully completed.

After Louise fundraised and designed the first Angel Charity for Children Ball in 1983, which was an amazing success, Jonathan Tisch contacted Louise to ask her to join his hotel staff to design and stage the grand opening of Loews Ventana Canyon Hotel in Tucson in 1984.

Louise Thomas was on her way and was quickly recognized as the premiere event planner in Arizona. She travels the country creating events for Corporate America as well as Political Events for an assortment of candidates. Of course, when President George Bush visited Tucson to support a political candidate of choice, Louise was asked to design and produce the entire event. The Secret Service poses no threat to her.

Louise Thomas specializes in creating original once in a lifetime events.  Her full service production event company designs and produces all events from start to finish. Whether you are having a Destination Wedding, Corporate Event, Bar/Bat Mitzvah, Non Profit Gala or any Social Event… Louise Thomas Events will make your event an event to remember.